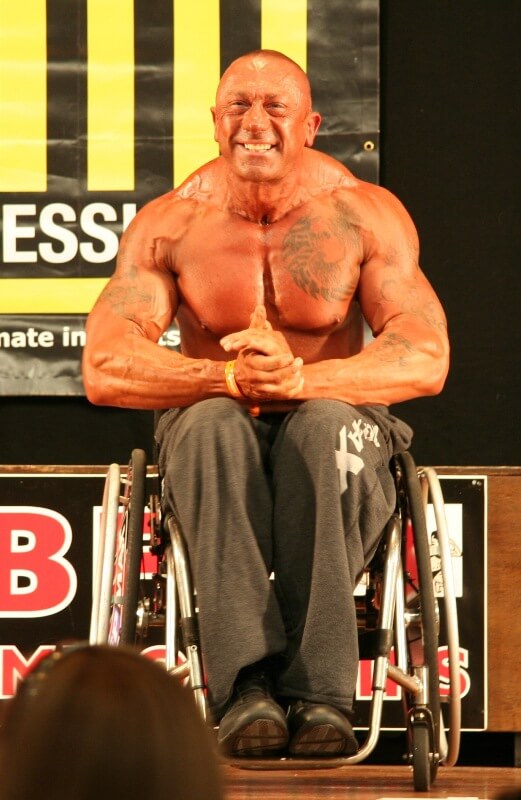 I had an extremely active life in 2000; power lifting, rugby coaching and working full time. But everything for the rest of my life changed in a heartbeat I had a bleed to the brain and after a long time in hospital I was allowed home.

None of the hospital consultants could tell me why it had happened or what the cause of the bleed was, but I started to be treated in neurophysiology. After a few months, one of the senior physios told me she was not happy with my recovery and was going to re-refer me back to the Neurologists. There started the longest journey to diagnose what had happened? I was told I might have Parkinson’s Disease, Huntingdon’s Disease, even was told by one top Neurologist “you are depressed and your brain is stopping your limbs from working as they should!” I was a bit low but that diagnosis made me even more determined to find out why my balance was going and why my speech was slurred.

Back in neurophysiology I meet a lady who in just five minutes of treating me said “I know this is a long shot but I think you have ataxia!” Obviously I had never heard of ataxia, but she went away and found the name of the nearest ataxia specialist neurologist to where I lived. I went to Sheffield Royal Hallamshire Hospital and met Mr Marios Hadjivasiliou and in five minutes he was telling me he was very confident I have all the symptoms of a very rare disease of the brain known as cerebral ataxia but there are lots of tests to confirm it. Well, he was right, and to top it all I was told I had an extremely rare form known as Opsoclonus Myoclonus Ataxia. This had taken five years but finally and quite happily I had been diagnosed with a very rare disease. At least I knew what it was so my question was “How to I keep this progressive degenerative disease from totally taking all my bodies functions?” “You can’t” was the reply, (but I have always lived my life by one line “NEVER SAY NEVER!”)

The neurologist was right, I started to have severe balance and limb co-ordination problems, my speech was extremely slurred and my swallowing was starting to fail.

During that time I suffered many different challenges, I has hyper sensitivity which is one of the most painful experiences I have ever felt and unfortunately this still returns to remind me I’m not invincible 🙂 Even though I believe I am !

My sight would fail for days

But eventually my brain started to learn new pathways to allow signals from my cerebellum to produce some movements.

I came home with 24 hour nursing under the understanding I wasn’t going to recover. I was fed by tubes into my stomach as I could not swallow. Having been told that I would never be without nursing care was an incredibly hard thing for me but it didn’t sink in until the day the District Nurse came to talk to me about my “final days at home”! MY own GP visited everyday as he was positive I would die I the night.

But one day I woke up to living and not preparing to die.

“THE GYM.” I thought I always felt great when I was in a gym so that was my first ambition, but I had to learn to swallow or I knew I would never get myself out of this bed. Everyday my care team would help me practice swallowing until we dared to risk a sip of water, it went straight into my lungs and I nearly coughed the tubes out of my stomach that were feeding me. But everyday I tried to sip water and one day in October I didn’t choke.

That was the start of my journey; I knew then that if I could train my brain to swallow again I was going to get the feeding tubes out one day!

Everyday I sipped water, some days coughing some days almost drowning as the water just poured into my lungs, but everyday I tried to swallow. By December I was eating soft foods and I went back into hospital to have the feeding tubes removed; I was so happy to be looking forward to another operation as this was a day of victory. I didn’t loose sight of the disease, which had taken my ability to walk, and I was now paralysed from the waist down but this was not going to stop me from getting back into the gym. January 2010 I joined Angel’s Gym in my local town of Mansfi

eld Woodhouse, Nottinghamshire and the face on the owner Nigel Goundry was a picture, one that will stay in my mind forever when I said ” I want to join your gym please “.

My training started with the most basic of movements and, to be honest, my daughter, who was 5 years old at the time, was stronger than me!I used a brush handle to exercise with as it was just about all I could lift.!!

By May, my body shape had finally started to change and my swallowing was getting better month by month. Nigel showed me a poster for the British Finals and the Wheelchair Class was on it; that was it, my next goal to get in condition for the British Finals. What was I thinking of? Well, having never been a bodybuilder, let alone a competitive one, this was going to be hard. I couldn’t swallow food properly and had a huge medication program still. I would liquidise my food on the days I couldn’t swallow properly.

What I would like say as I draw to close is please don’t feel any sorrow for me at all as I’m not sorry I’m happy !

I have learnt so many things about myself so good some not so good, I’m a lucky man.

We are all lucky and I’d like to leave you with this thought.